Mural commissioned as a gift to the neighborhood community of Ibn Batouta. Painted with amazingly brilliant acrylic paint, I wanted to bring this paint back home. One coat light or dark would cover any other color. While painting here we experienced such completely generous, warm and welcoming people. Memories and friends were made, we can’t say thank you enough and hope to get back there again soon. 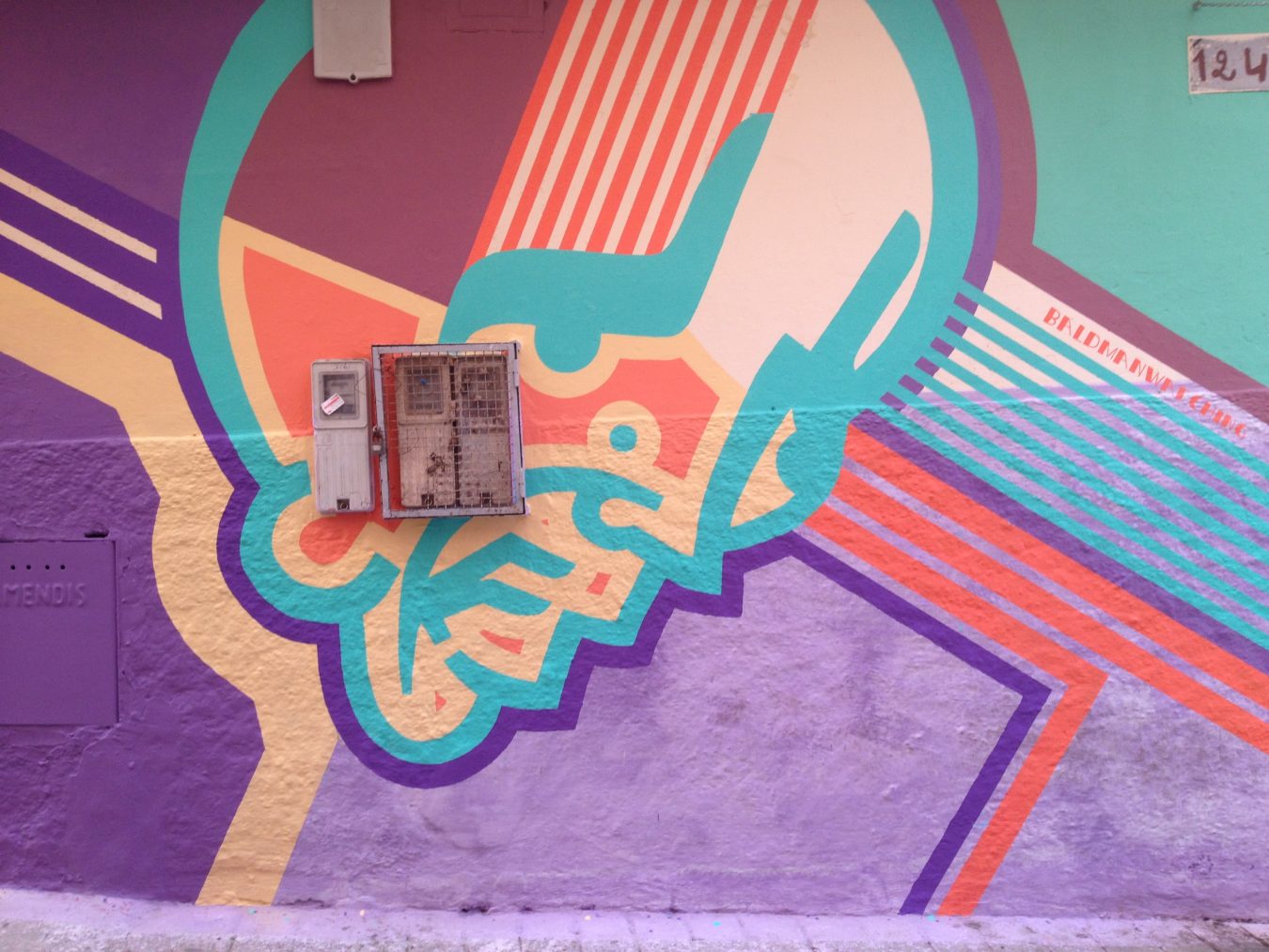 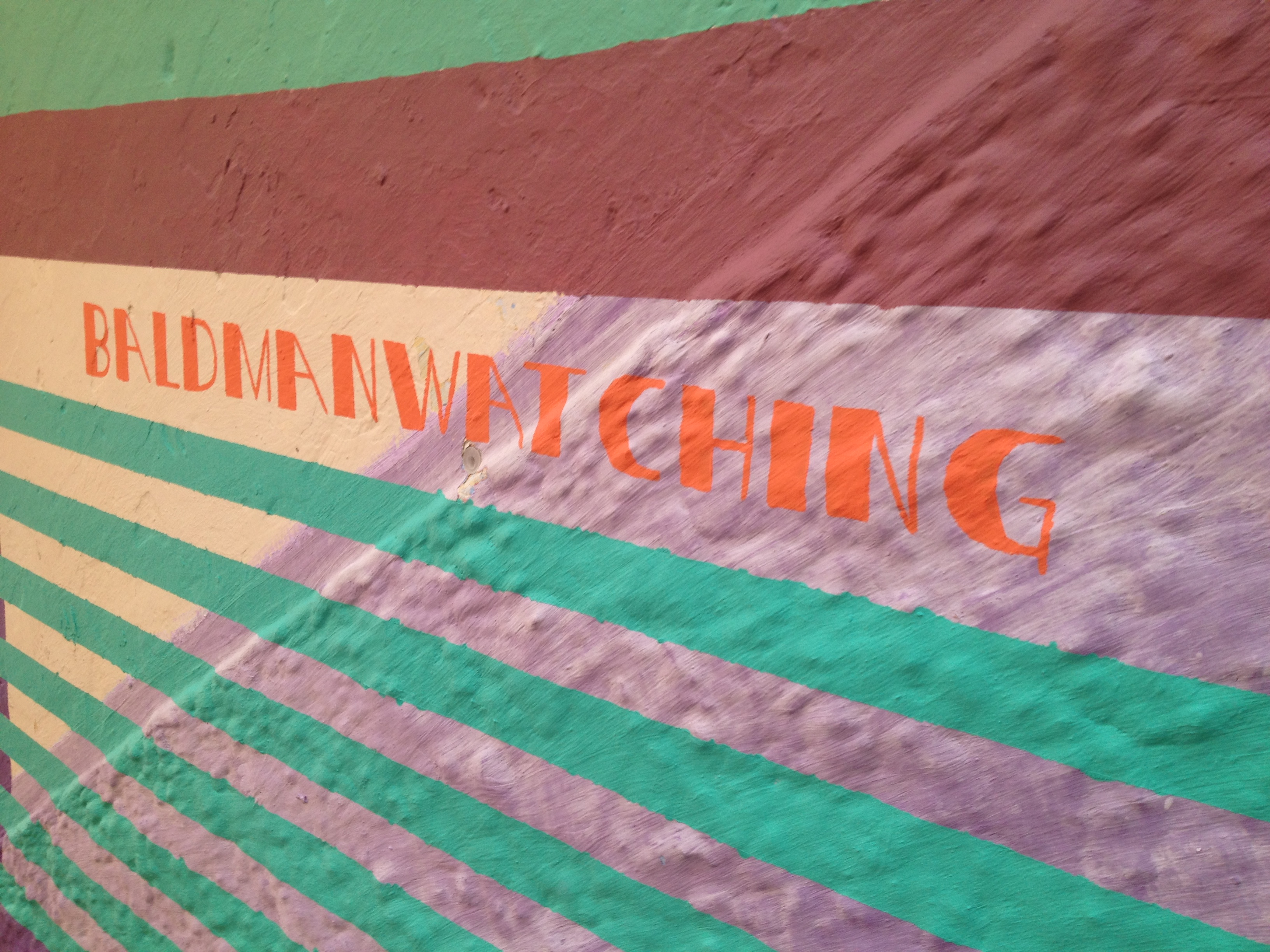 I had recently been in the Bay Area performing and was struck by the tiny movable homes taking up no more than a parking space, I saw lining the streets in West Oakland. Upon learning I had been awarded this residency, I felt compelled to explore these movable tiny houses for myself, as I had not seen anything of this sort in the Northwest despite rampant homlessness.

Using salvaged wood in tandem with other recycled/donated resources, I created a portable living space. By painting the exterior of the structure I aimed to make this home command the attention of those who would rather choose to ignore the state of homelessness and displacement in our area. The home acts as a billboard, stating in the most matter of fact way the basic necessity of having a roof over one’s head. Voicing through words the needed legislative action of RENT CONTROL to help create sensible affordable homes for those in need.

I can’t help but notice the increase in the past ten years of people living on the streets in Seattle, especially in the last three years. Can this temporary home be a sense of pride for the inhabitant? Could this action open the eyes of developers? 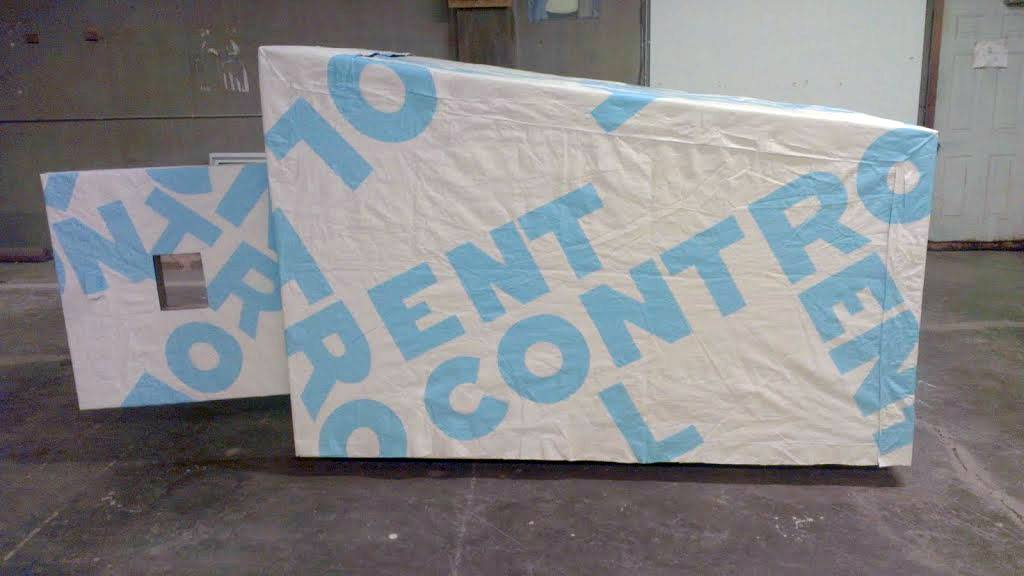 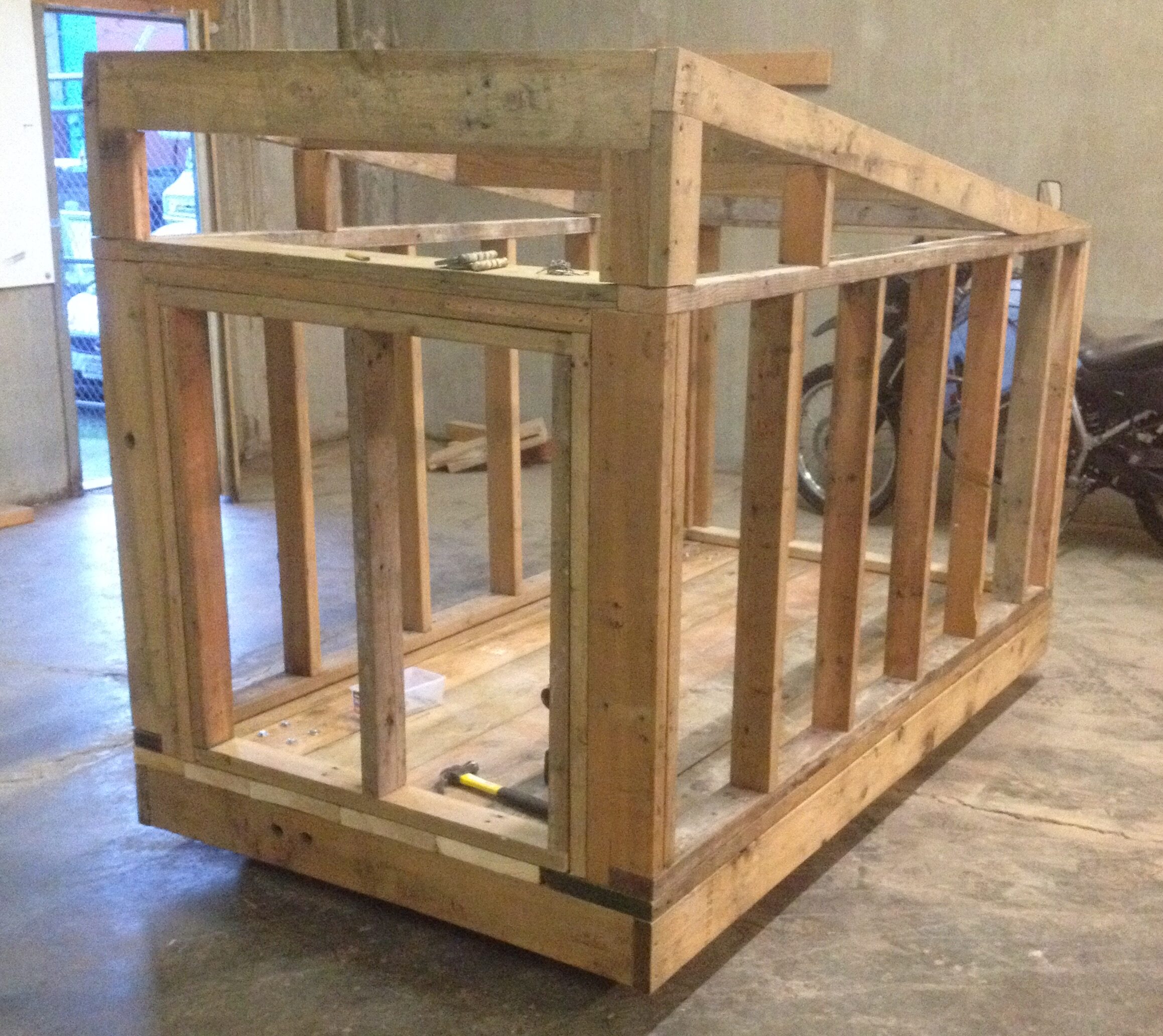 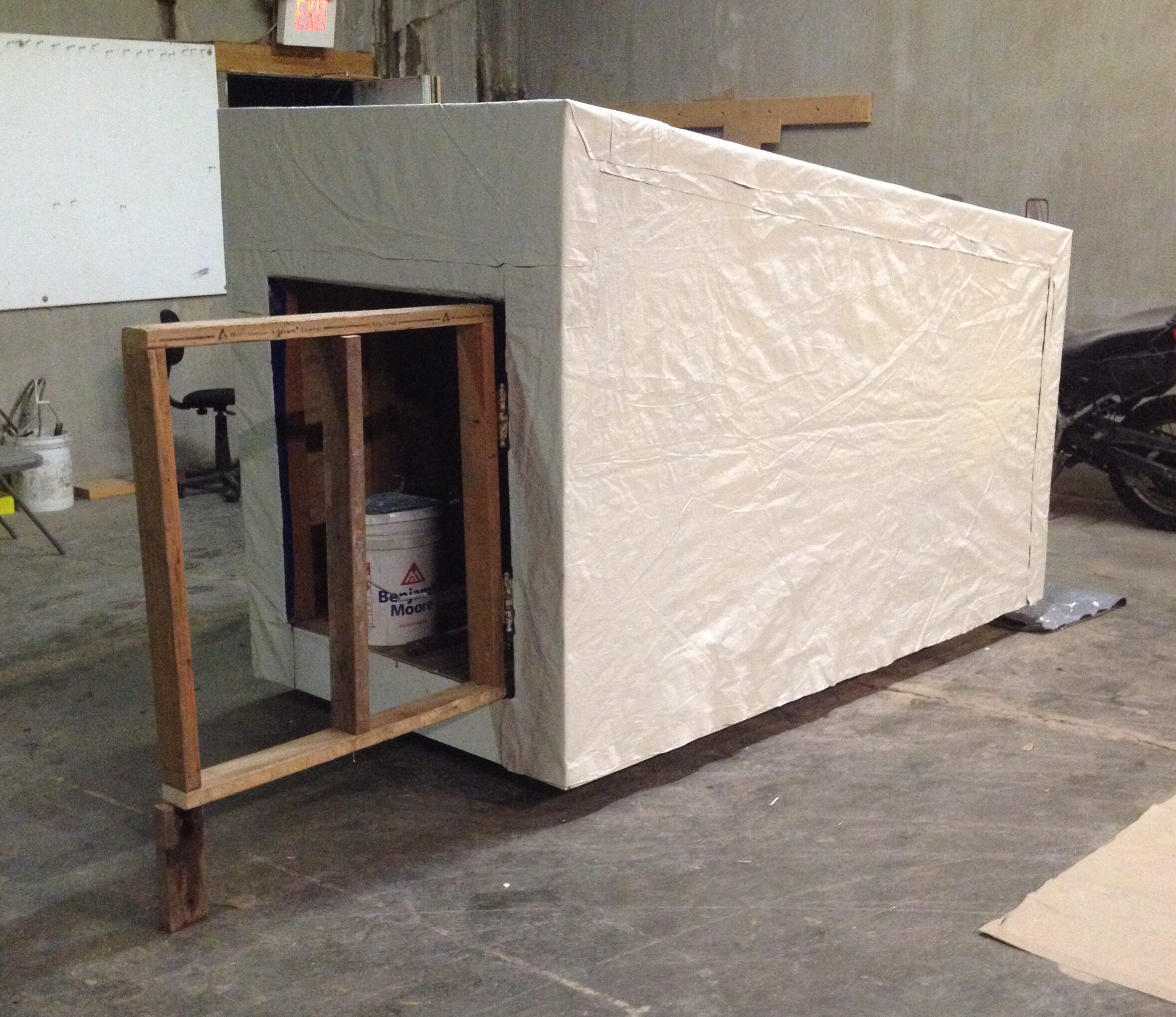 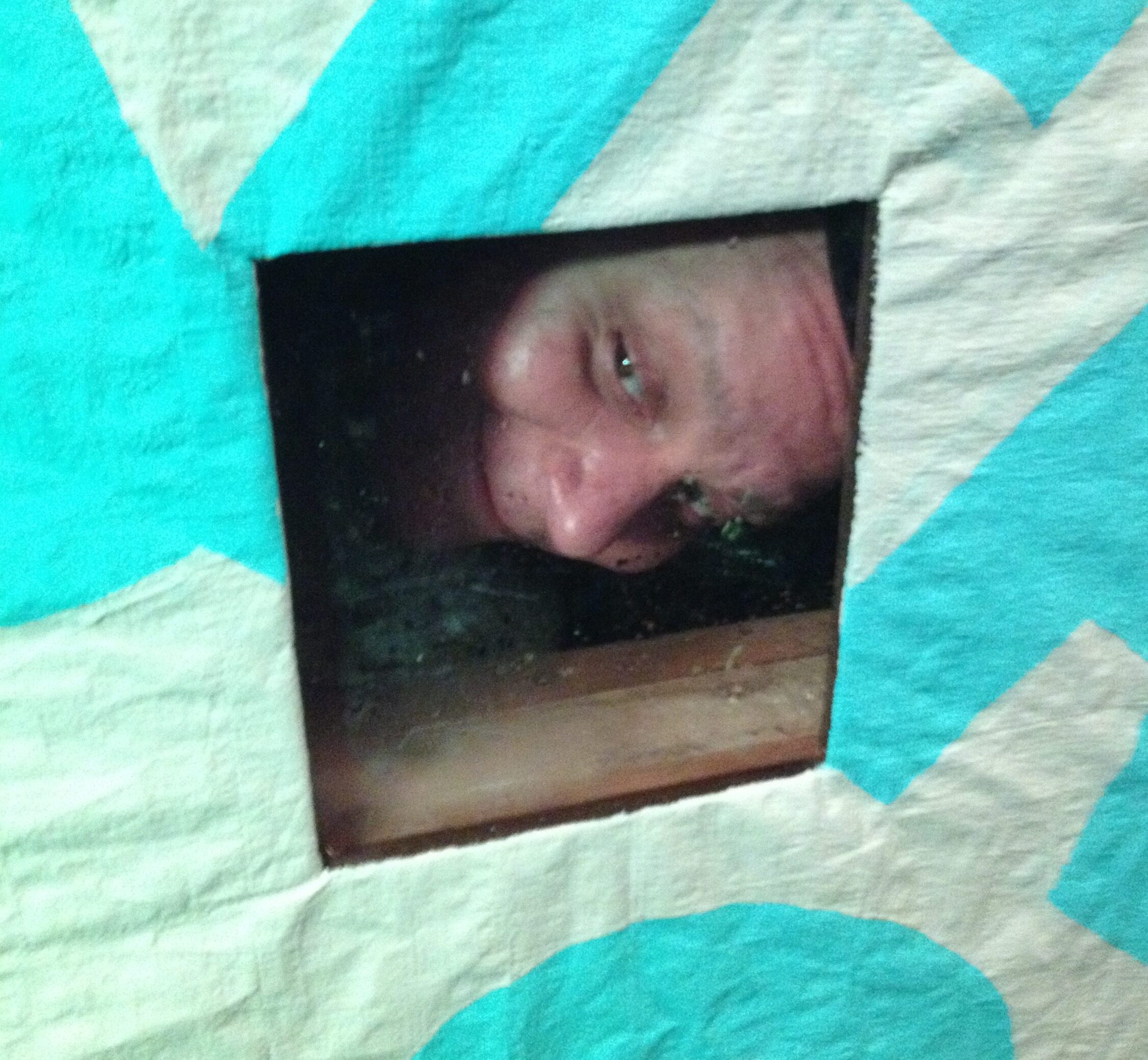 Commissioned by Urban Artworks, this mural was meant to both amplify the business located in this building, also this mural aimed to create a bright colorful addition to the neighborhood, of which the nearby SoDo track is one of the largest public mural corridors in the country. Length is 128’x 20′ at the highest point. 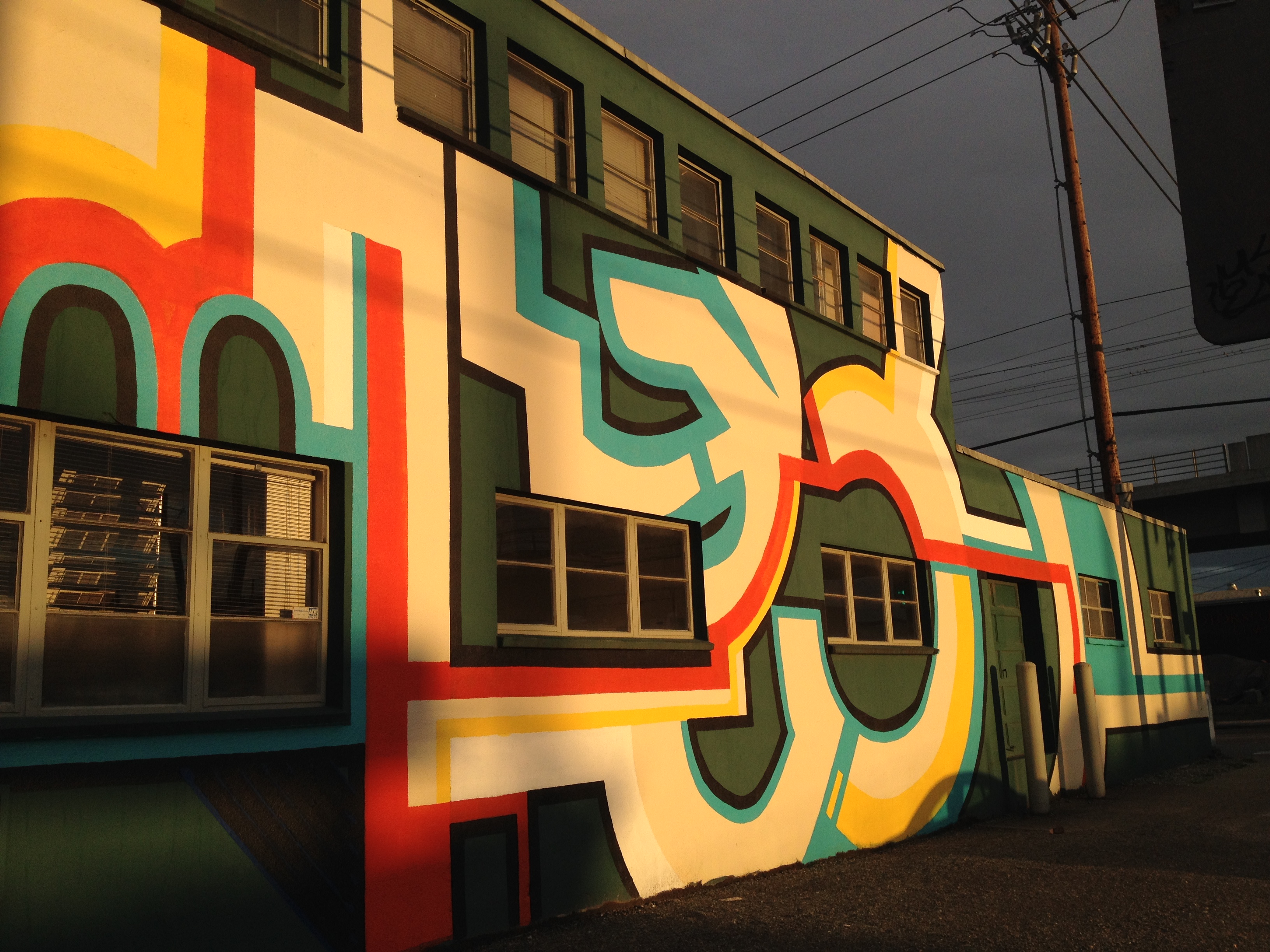 Commissioned by Art of the City street festival, I painted this 12’ by 8’ mural in one day out in the sun. I was one of a collection of other muralists who were all commissioned to live paint. 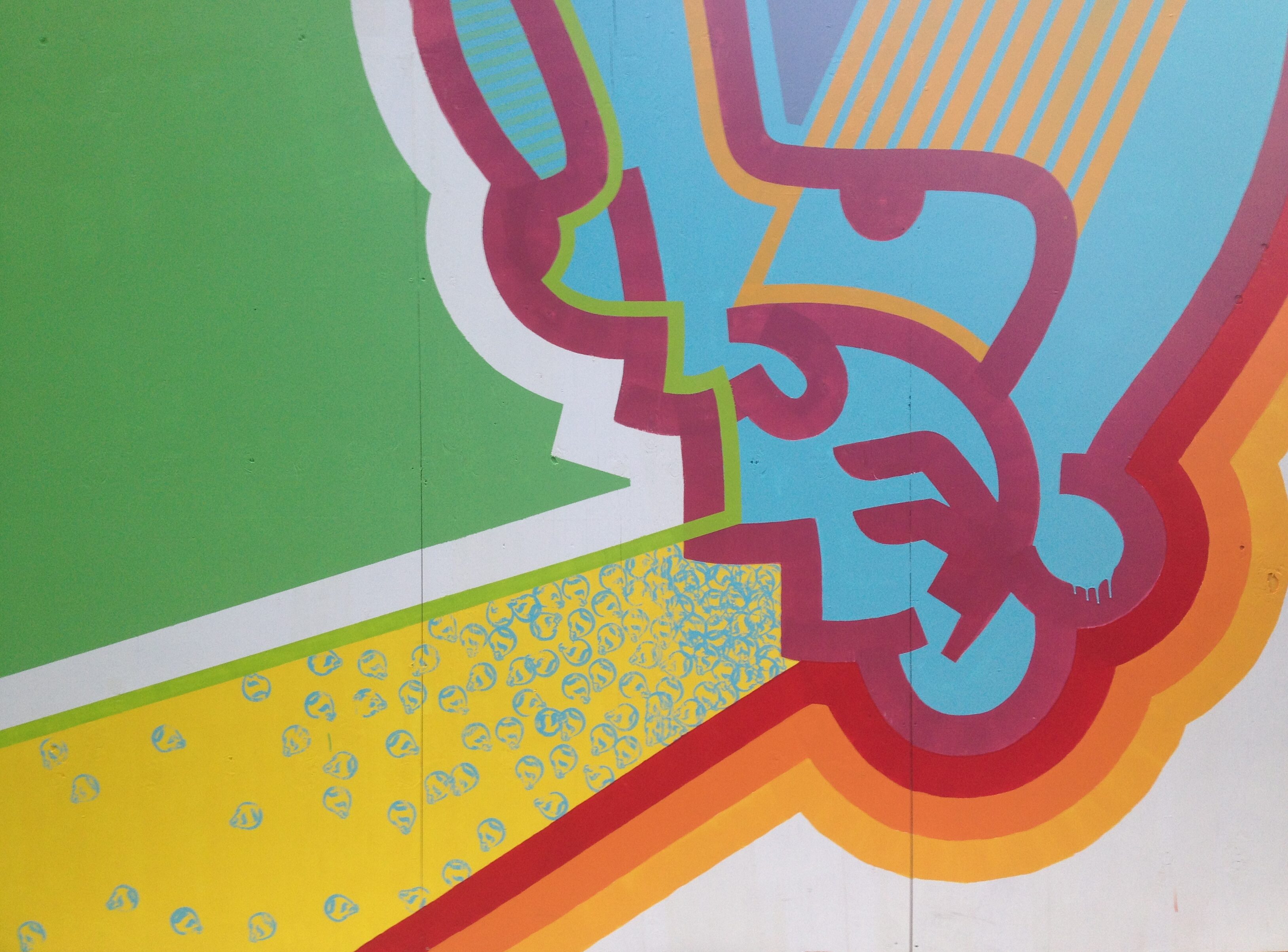 There are a lot of options when it comes to what one could paint. I decided a long time ago that I would rather spend my time honing my abilities as a muralist, then obsess over what I could paint. Most of the time when I paint a mural you will see the Bald Man character, this character is a vehicle for artistic exploration. I do paint and draw many other things. This character is part me/part my impression on the world I live in/walk through. 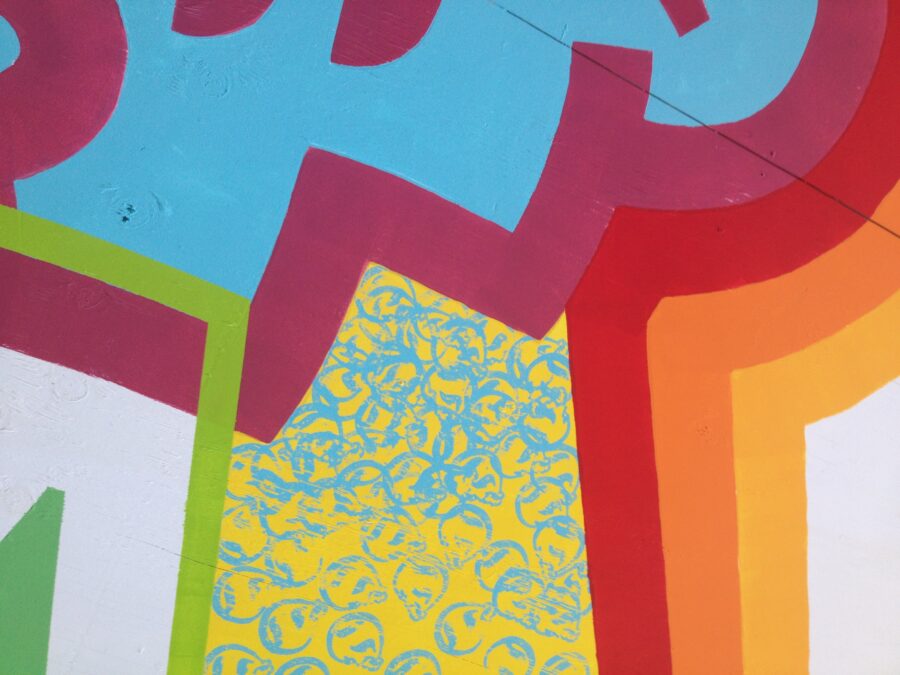 Pondering the actions of humans, while wandering the streets of a country that has in the not so distant past, used the activism of public art as a means to support and spark revolution. Poster reads “Man’s Inhumanity to Man”. 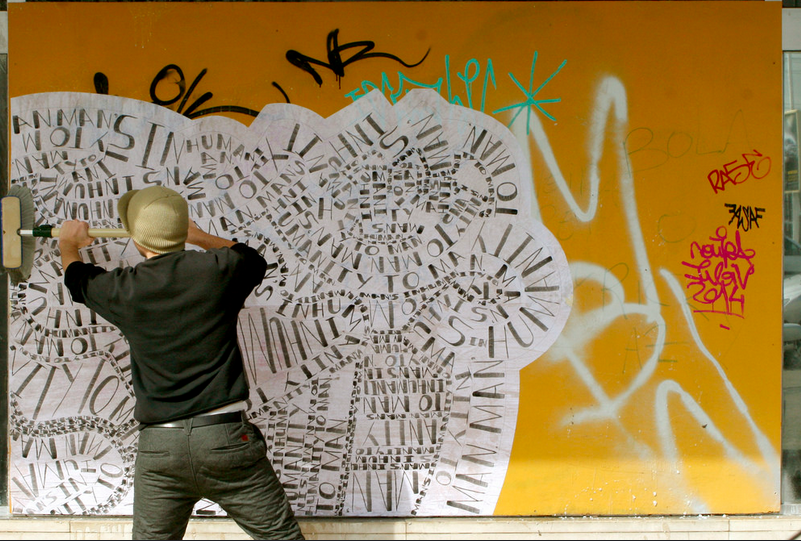 Always looking to blend or camouflage work into its surroundings. This approach might buy the work a little more time on the street, or it may not. The reality of not only street art being ephemeral but everything slowly crumbling before our eyes is a beautiful thing to observe. 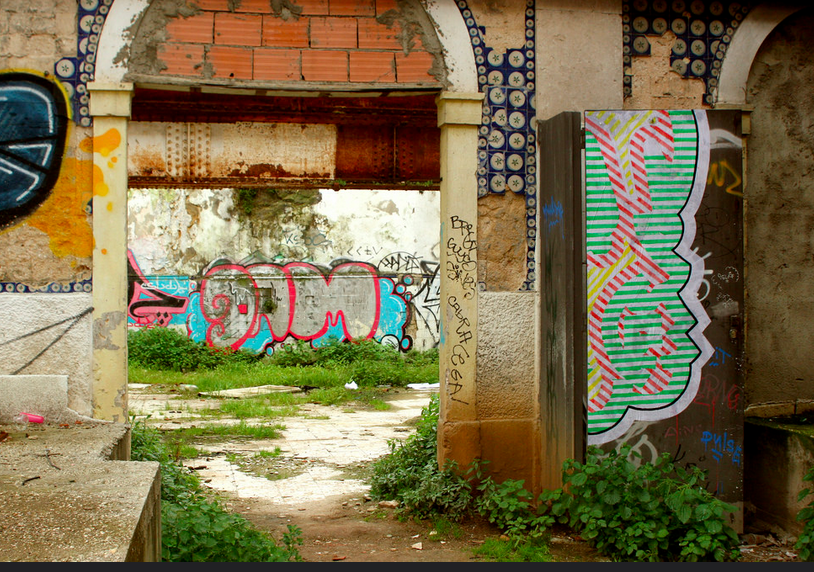 Sleeping under a bridge is a man and his dinosaur mask. Waking up, he walks into the heart of the city and puts on his mask. A friend, a stranger, a kindred soul emerges and the mask is passed off and traded. The man watches and then walks away with a Sea Hawks hat.

Inspired by creating performance gifts for my schizophrenic mother Dinosaurs and Sea Hawks is another story in my ongoing performance works. The dinosaur mask is intended as a reminder of childhood and quite literally a mask to hide from the harsh reality of the world through my mother’s eyes.

Written and acted in by Ezra Dickinson. 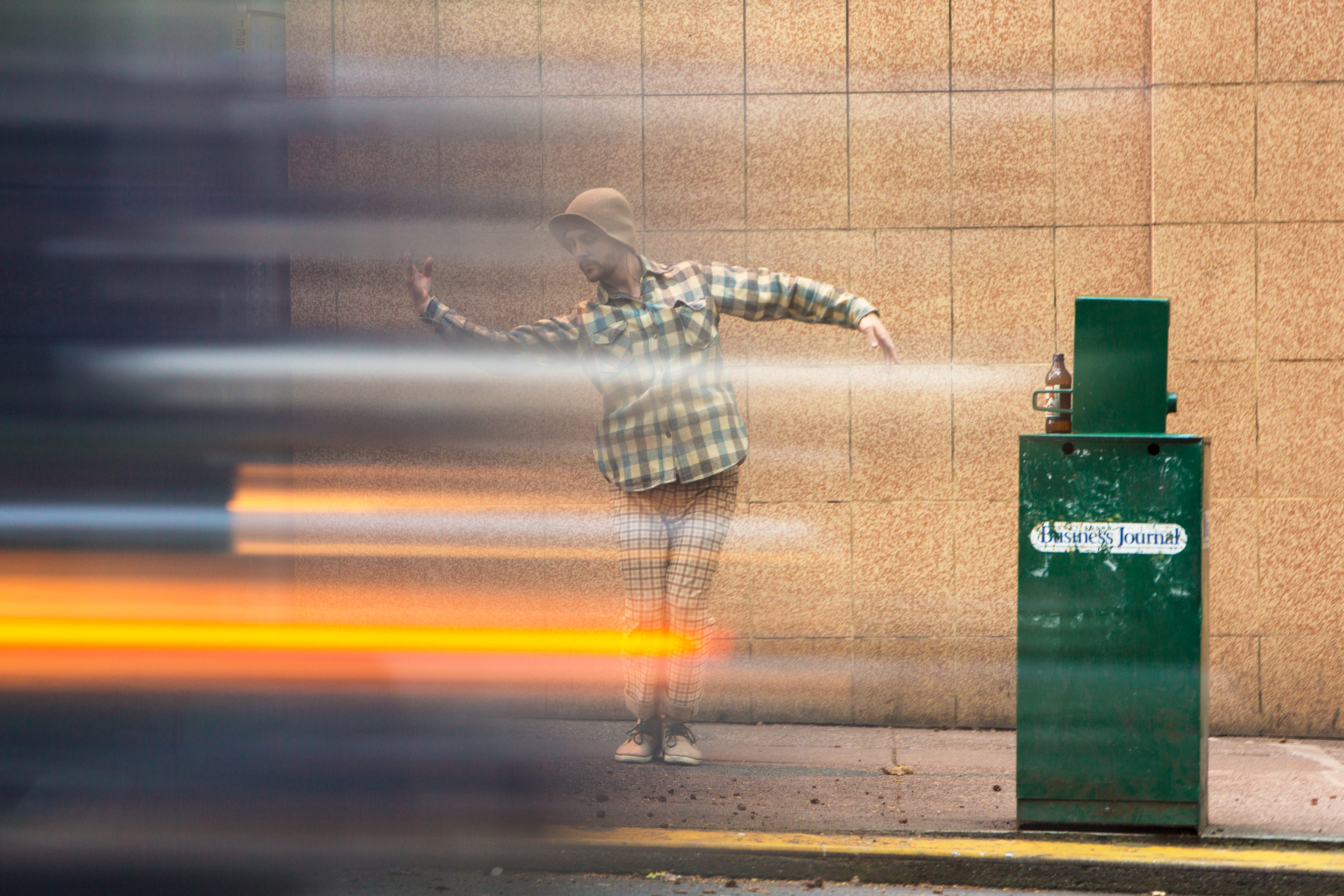 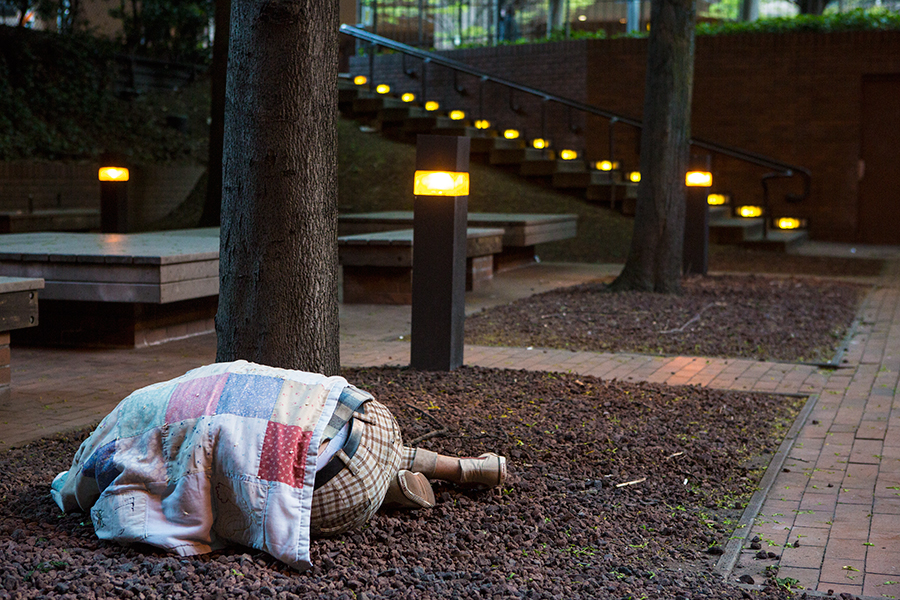 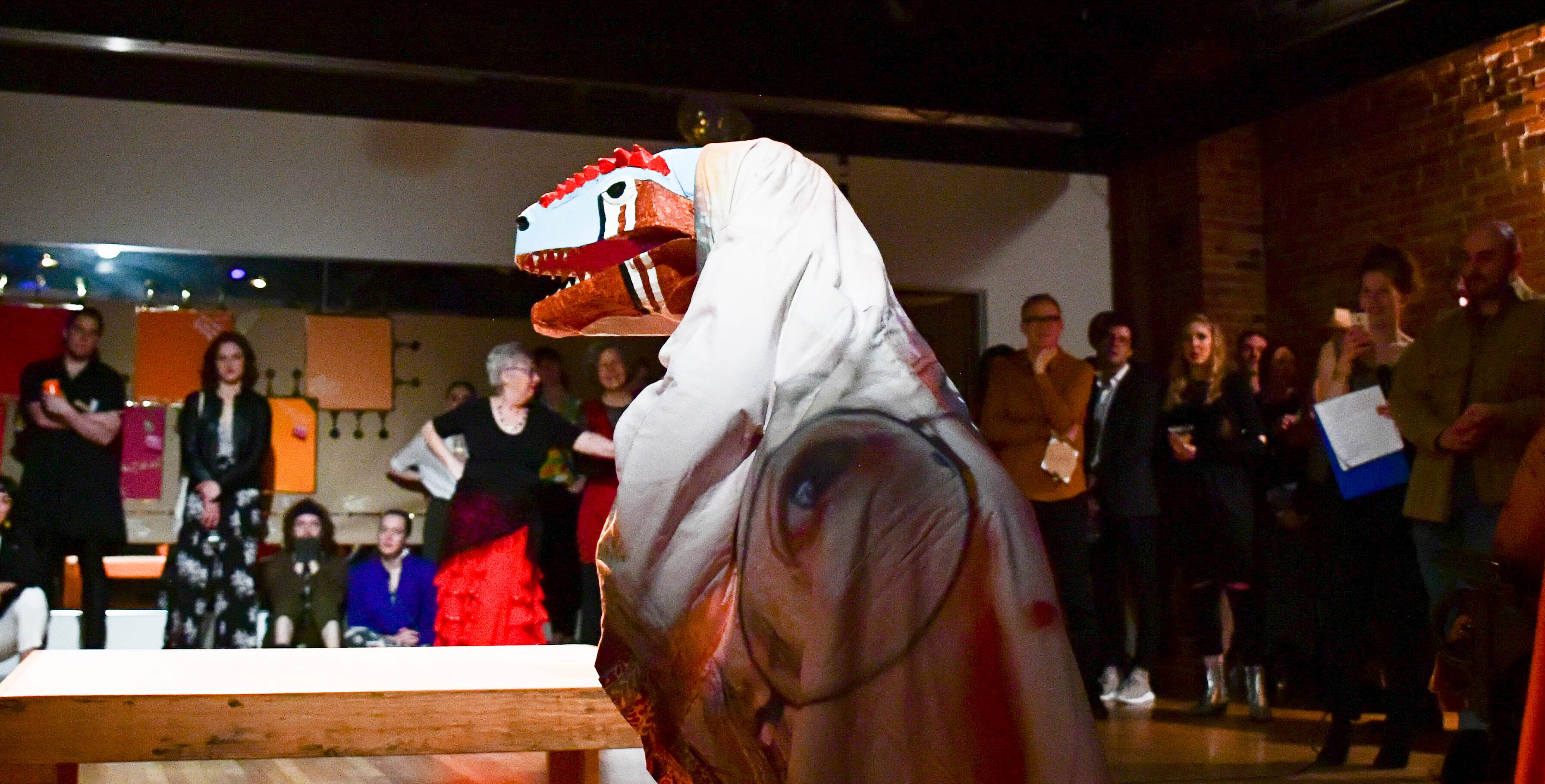 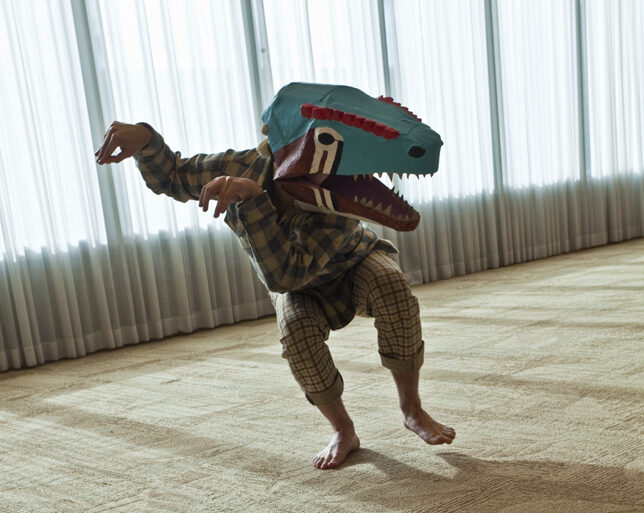 Mural painted as a gift to the neighborhood of La Boca. Walking through Buenos Aires I was approached and asked if I was a painter (my pants had paint splatters all over them). When I said yes, I was presented with this wall and asked if I wanted to paint something, of course I said yes. For three days I painted on a very precarious ladder, while kids blew up firecrackers, little grandmothers fed kittens, and the whole neighborhood collected by me to watch this mural take shape. It was an amazing experience. 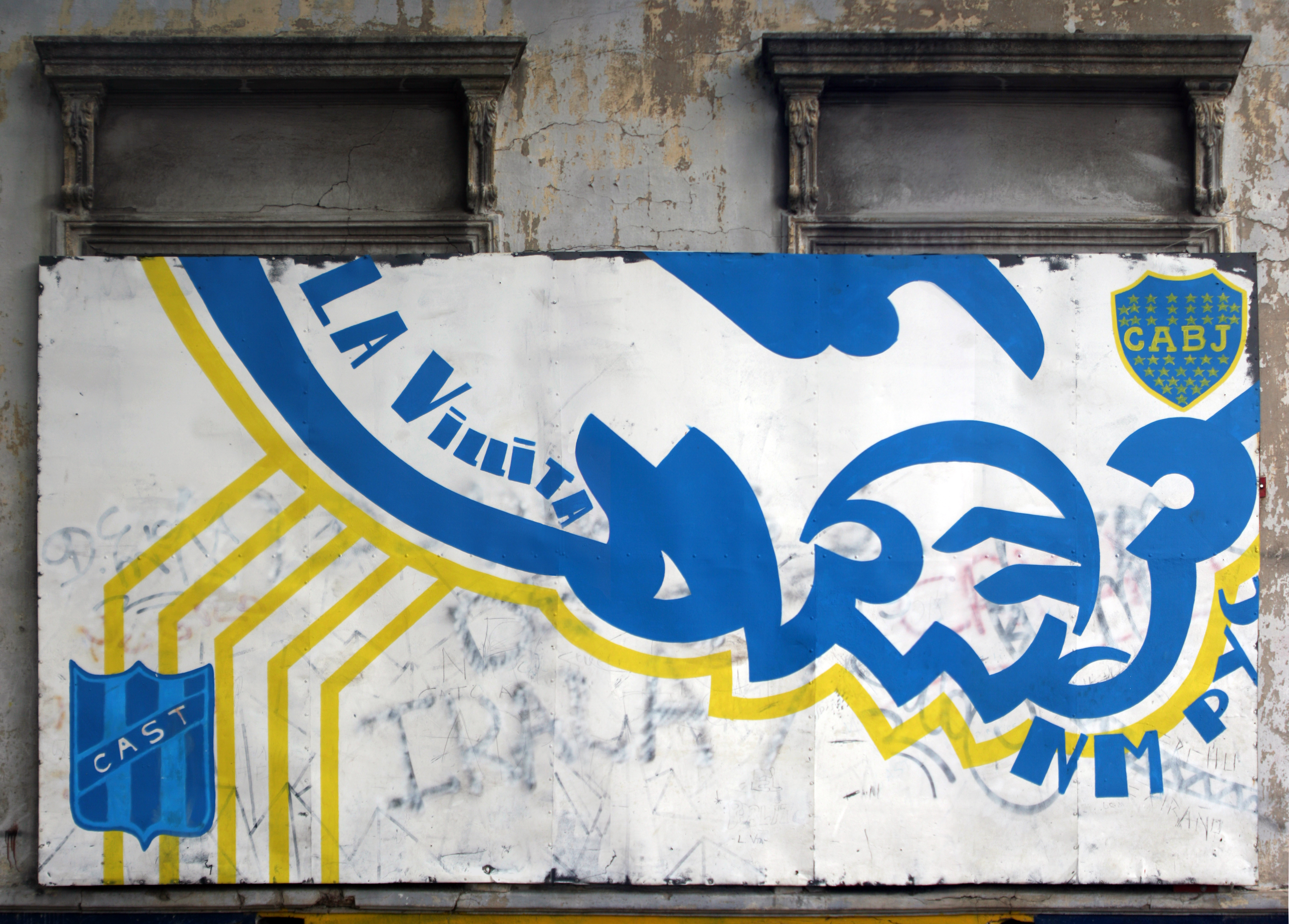 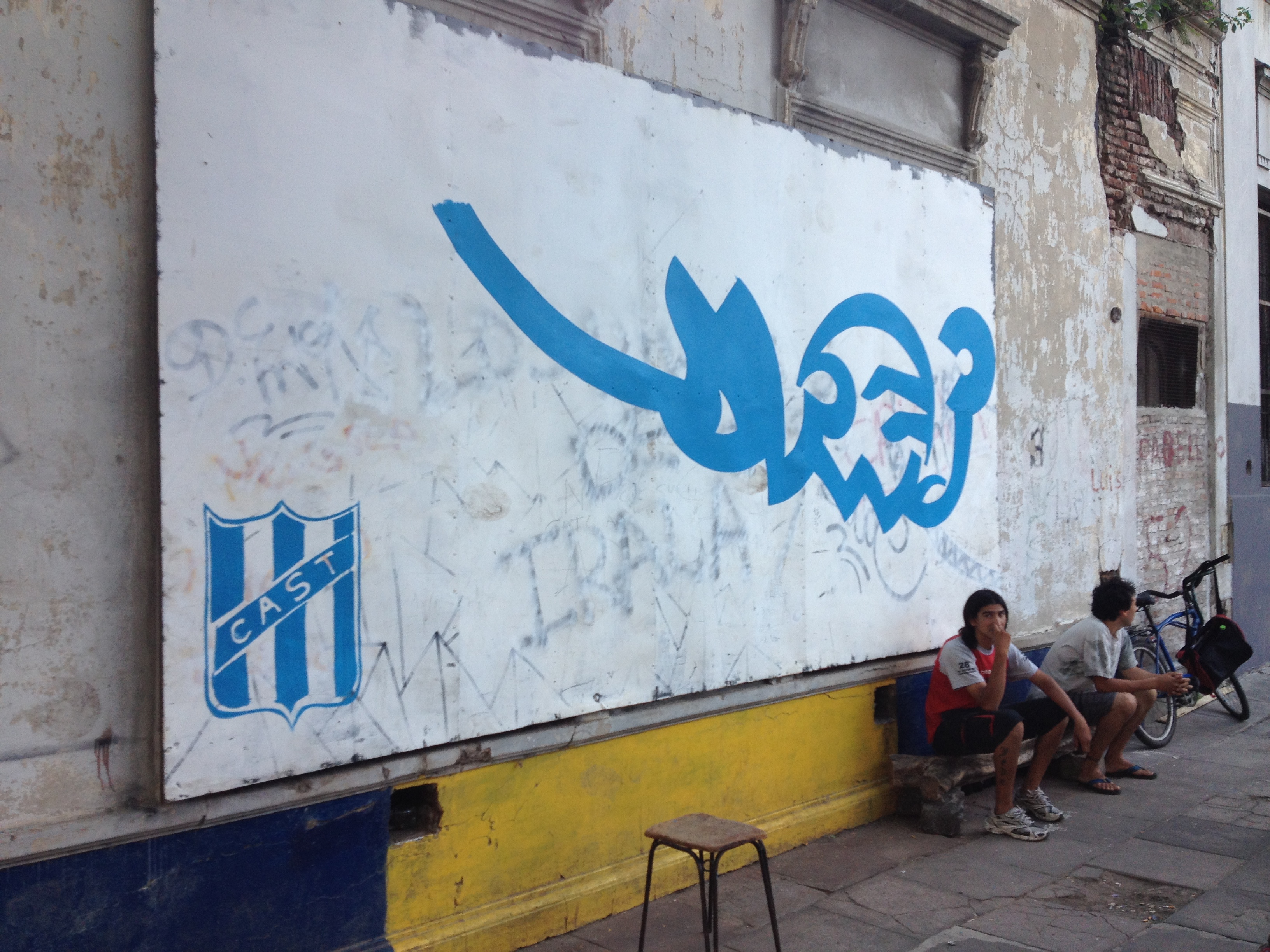 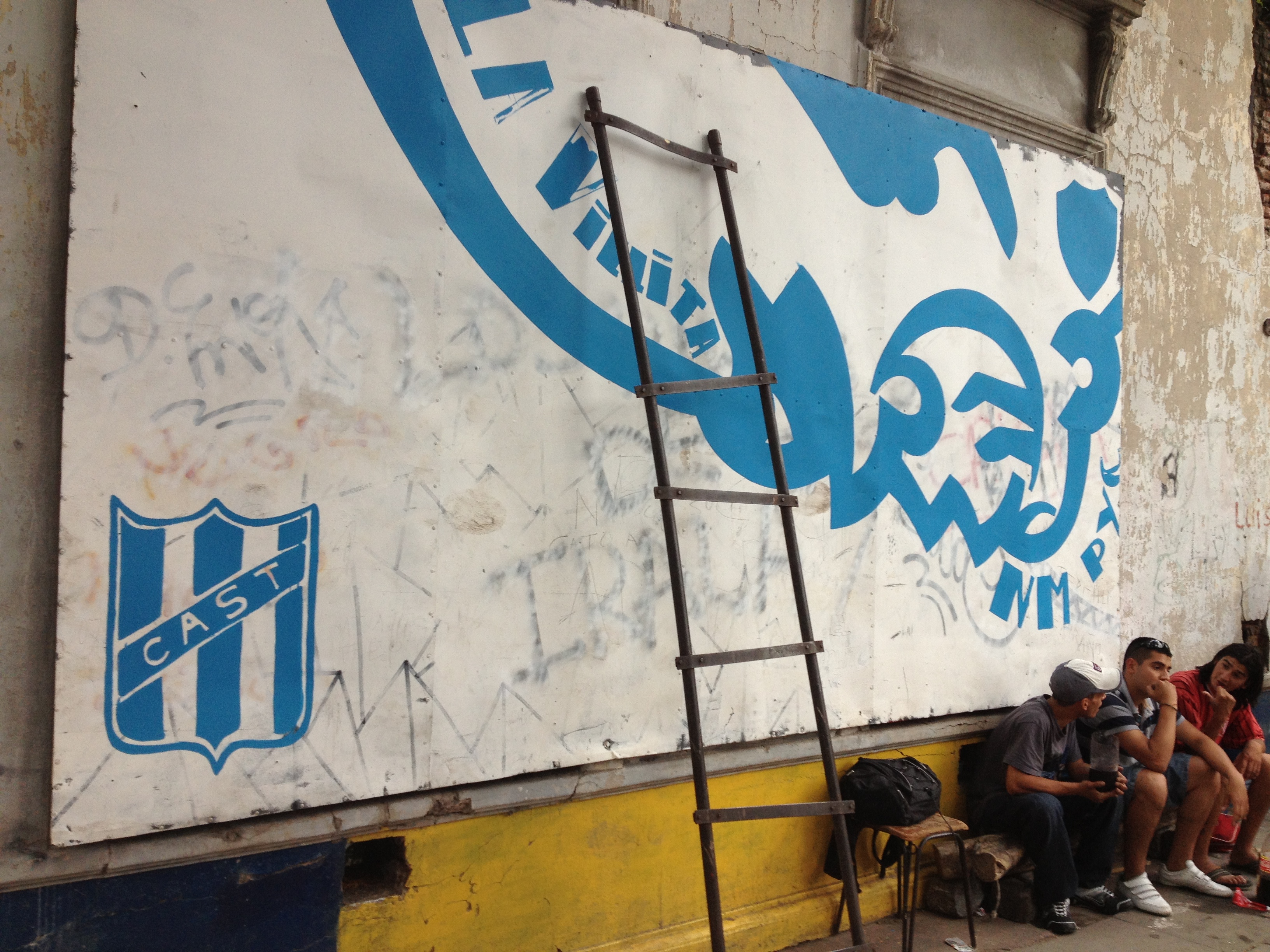 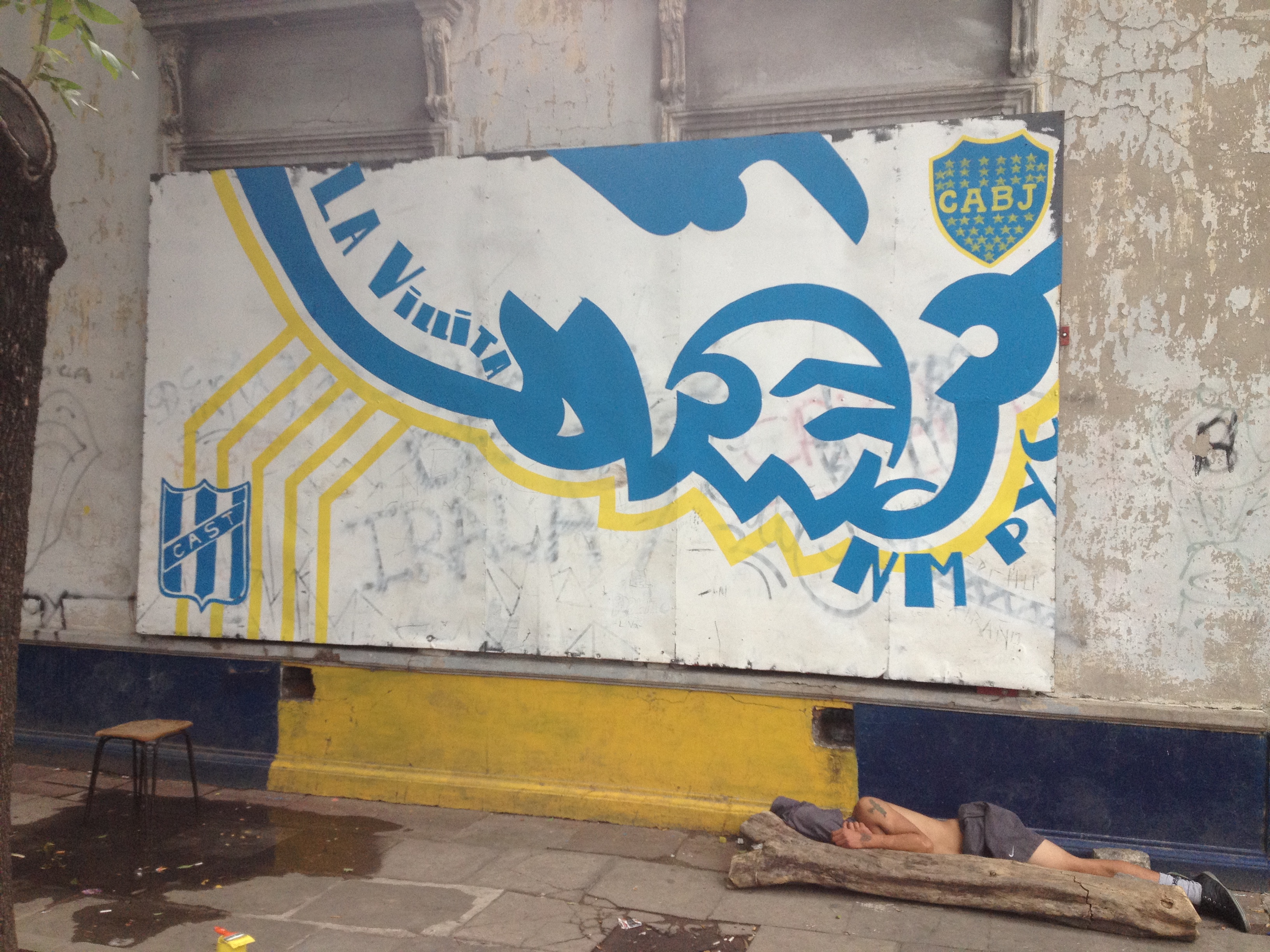 Commissioned by Sound Transit for display on Capital Hills’ former red wall around the construction site of the light rail station. For the holidays, ten artists were paired with ten nonprofit organizations to create a work of art on a holiday star. I was paired with Velocity Dance Center. I created this geometric line pattern using painter’s tape and acrylic paint. 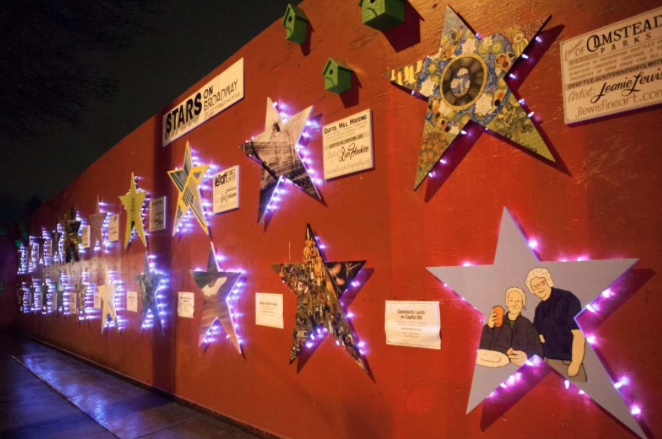 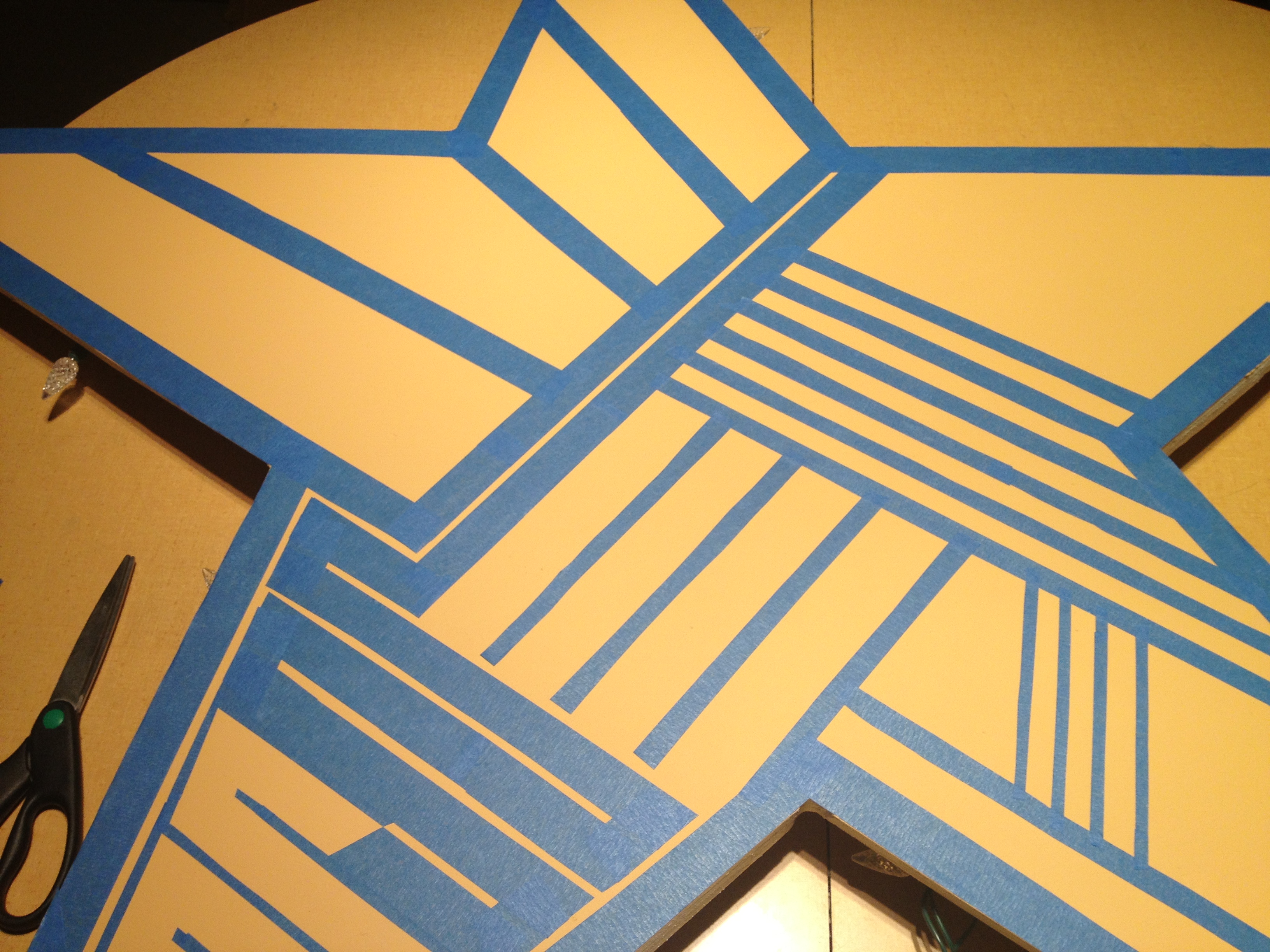 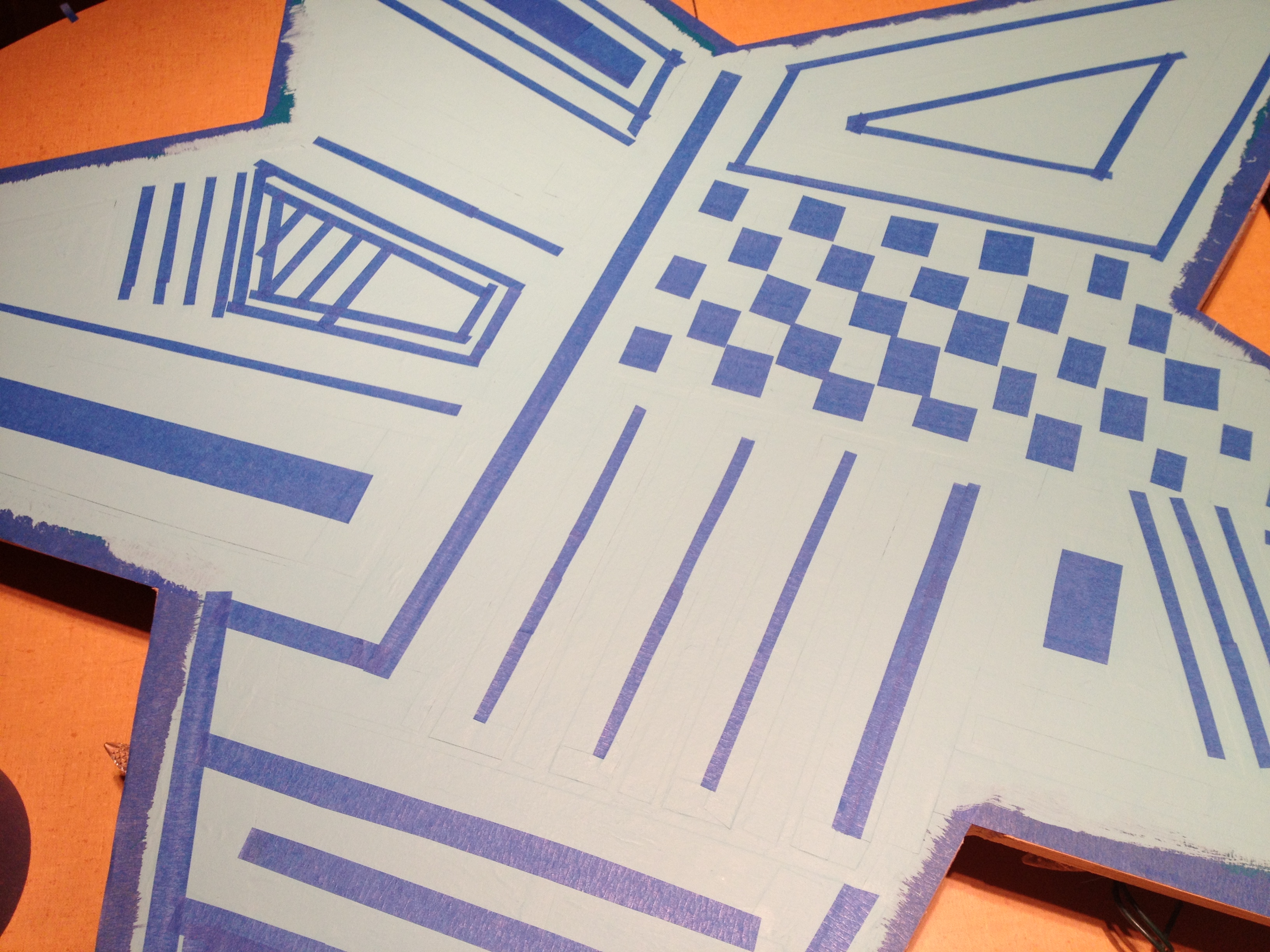 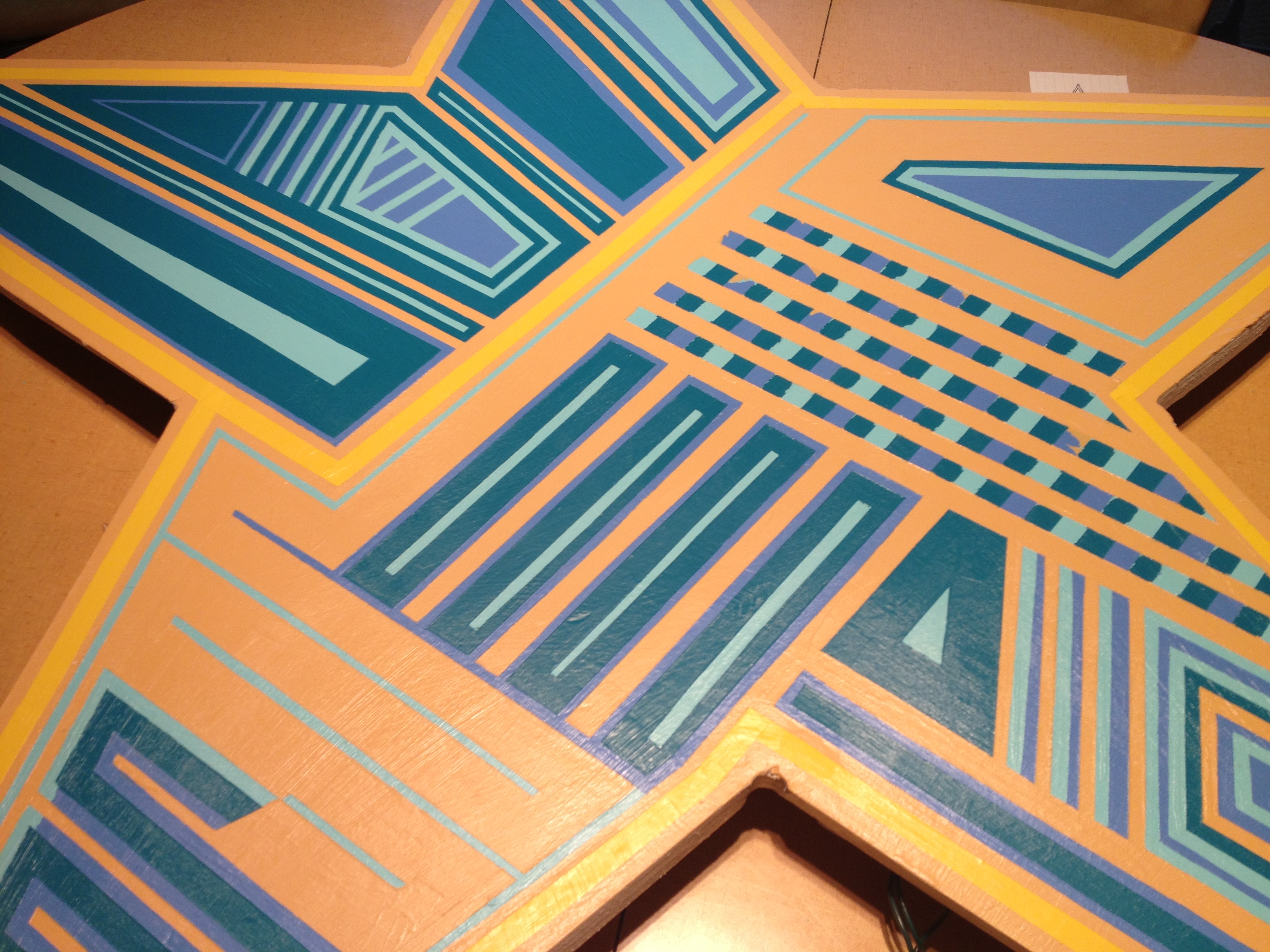